Spread over 50 acres of land, a farmhouse colony in Sohna was razed by the Town and Country planning development on Thursday. 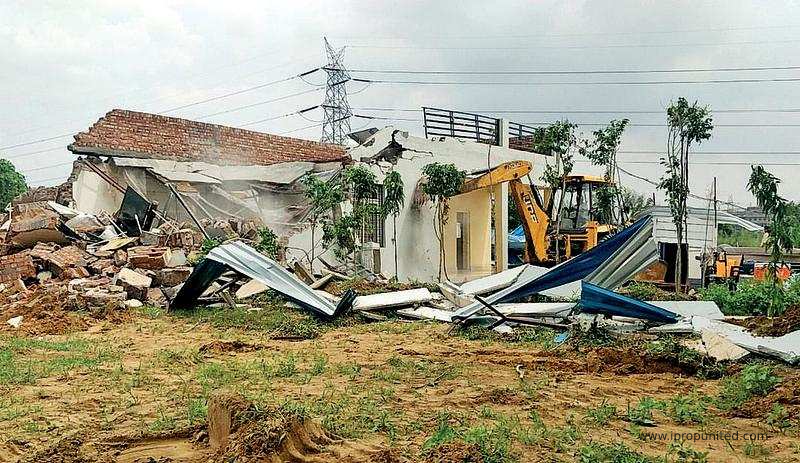 The builder of the project, named “Nature Valley” in Kirani and Bhogpur villages of Sohna had already built boundary walls, guard rooms, road network, light poles and other amenities and was planning to sell the farmhouses constructed on one-acre land.

On Thursday, a farmhouse colony built on 50 acres of agricultural land in Sohna was demolished by DTCP.

According to complaint, the developer completed the construction, laid roads and erected electricity poles but cables were not connected yet. He was planning to sell farmhouses and also constructed one farmhouse as a sample to seek the attention of investors.

The builder had no permission from any department to construct any farmhouse. As per norms, developing farmhouses without permission is equivalent to developing illegal colonies, said RS Batth, District Town Planner (enforcement)

It was found during the investigation that developer was hiding the facts regarding the permissions and approvals from investors to make a sale. Also, he was promoting illegal farmhouse colony through social media to attract the investors.

The officials said they knocked down three farmhouses, road network, boundary walls and guard rooms with the help of earth movers in presence of police officers. “The department is getting details about the builders and will recommend for FIR against them. Even if the farmhouses have been sold, the department will get details from revenue department and lodge complaint against the wrongdoers,” the official said in an interview with Economic Times.

On Wednesday in the report of TOI it was stated that illegally constructed farmhouses in Sohna are under DTCP radar and are likely to face action this week.

Following spike in complaints regarding construction of illegal farmhouses violating Haryana Development and Regulation of Urban Area Act and strict directions from DTCP chief, the enforcement team began knocking down all the illegal constructions on Thursday.